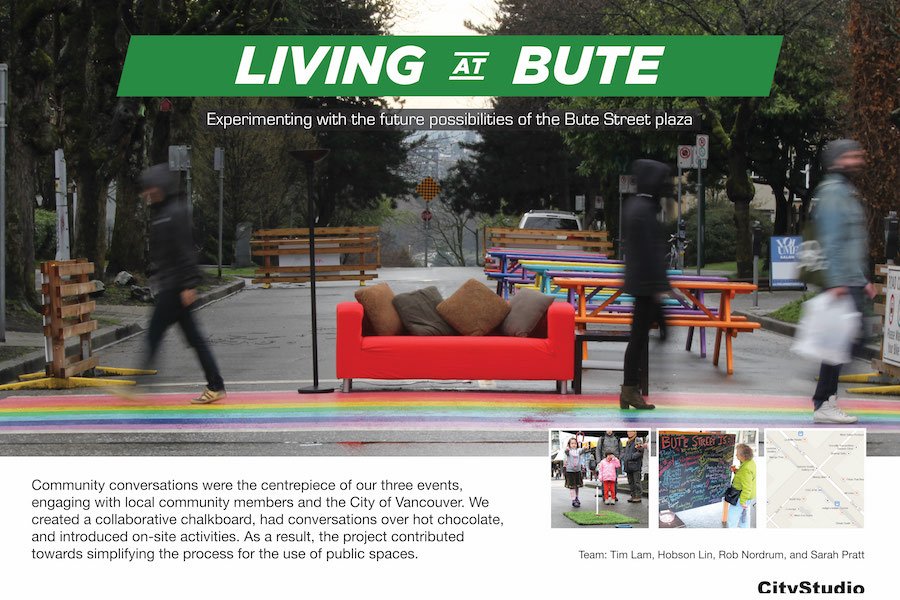 The Living at Bute project centers around public space, experimenting with future possibilities of the Bute Street plaza in the West End community of Downtown Vancouver.

The Bute Street plaza, also known as “The Heart of Davie Village”, was identified as an opportunity to not only encapsulate the culture and vibe of the Davie Street neighbourhood, but also foster connections and engagement among community members of the West End. The project stemmed from idea of the living room, the warm and inviting social hub in everyone’s home. With this project, the aim is to bring that warm and inviting environment out onto the streets.Working with VIVA Vancouver, we held three events over the month of March, 2014 that focused on having conversations with the community and stakeholders about the plaza and introducing new and fun activities. We created a collaborative chalkboard for pedestrians to write and draw feedback about the plaza, sparked conversation over hot chocolate and introduced new on-site activities, such as badminton and live music.

“VIVA is working with different planning groups, including…students from City Studio who work on urban sustainability, to develop temporary public-space programming for the plaza.”

“Four months after Vancouver City Council approved a new community plan for the West End, city staff are working with CityStudio design students to implement the plan’s suggestions for the plaza.”

“A first in Vancouver!…Students from BC’s many post-secondary institutions took over Davie and Bute Street today in the West End of Vancouver, turning it into their own urban living room.”