 0.0/5
A public outreach campaign to generate social impetus to drive the adoption of green roofs in Vancouver by creatively and effectively imparting knowledge to Vancouver’s residents. 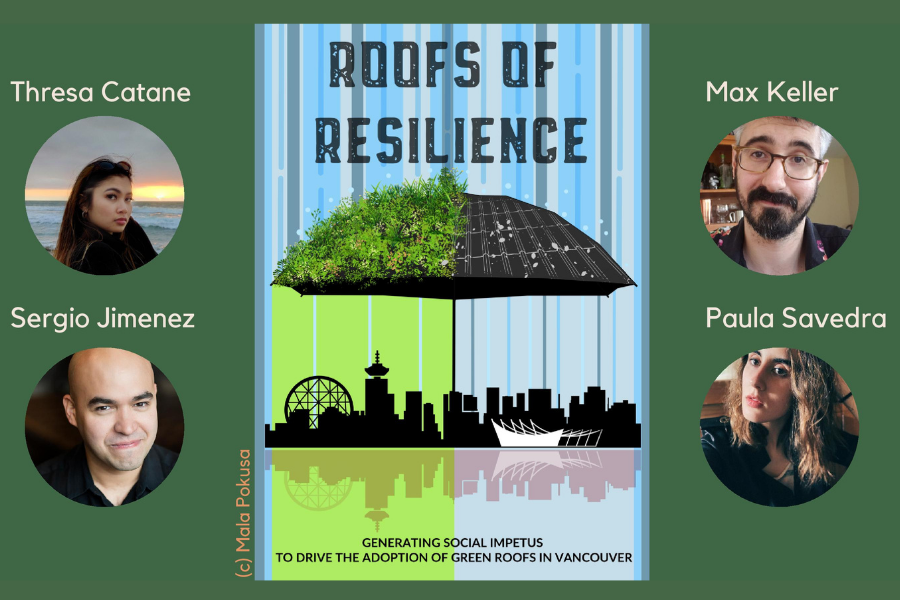 The Roofs of Resilience project seeks to disprove the misconceptions surrounding green roofs through a public outreach campaign. Through comprehensive research and analysis, this project aims to educate and inform the citizens of Vancouver about the potential and the benefits of green roofs in residential, commercial, and industrial infrastructure in the city of Vancouver.

Vancouver, or “Raincouver”, is infamous for its copious yearly rainfall; averaging 1152.8mm (Meteorological Service of Canada, 2020). Stormwater surges in grey infrastructure and improper irrigation have caused flooding in urban and residential areas. These problems are preventable by using green roofs to mitigate the stormwater surge in the city. Other benefits of green roofs include limited pollution dispersal, the insulation provided within buildings, and increases in the amount of vegetation around Vancouver. These advantages align with all objectives of Vancouver’s Raincity Strategy.

Green roofs are one of several compounding strategies for stormwater management in Metro Vancouver (Conger et al., 2019). As the regional climate changes, Metro Vancouver has projected a future trend of significantly more rainfall throughout the year (Metro Vancouver, 2016; GHD, 2018). Storm surges will become stronger, more frequent, and intensify over the next century. In addition, summers will become hotter and dryer. The realities of climate change have made green roofs invaluable. The widespread and rapid implementation of green roofs and the Raincity Strategy is essential to maintain Vancouver’s habitability.

Researchers have identified socio-institutional and cognitive barriers amongst both businesses and people as the prime issue that must be overcome before tackling other matters (Dakhal & Chevelier, 2017). The implementation of green roofs and other green infrastructure depends on municipalities, businesses, and citizens undertaking a united effort to fundamentally change the way their city interacts with its geography and climate. This requires a serious change of mindset in a short period of time.

Extensive research on green roofs has been underway for over a decade in Vancouver. The City has committed to capturing 90% of Vancouver’s annual rainfall by 2050 (Connelly et al., 2006; Conger et al., 2019). This project focuses on communicating the proven benefits, necessity, and immediate feasibility of green roofs on all new construction and retrofits.

We owe our gratitude to the persons who have helped us outside the group. For the prototype models, we give credit to Lana Guineau for creating the early mock-up prototype models and to Iko Catane for the final prototype’s visual model and architectural design. We also give credit to Malwina Pokusinska for realizing the Roofs of Resilience’s poster concept.