I Wish I Took the Bus

 0.0/5
We created a campaign to promote the implementation of new priority bus lanes, congruent with Vancouver’s climate emergency plan. This campaign is centred around all the benefits that this initiative could provide, namely, a more efficient and convenient transit system, as well as the incentive to shift toward sustainable modes of transportation. 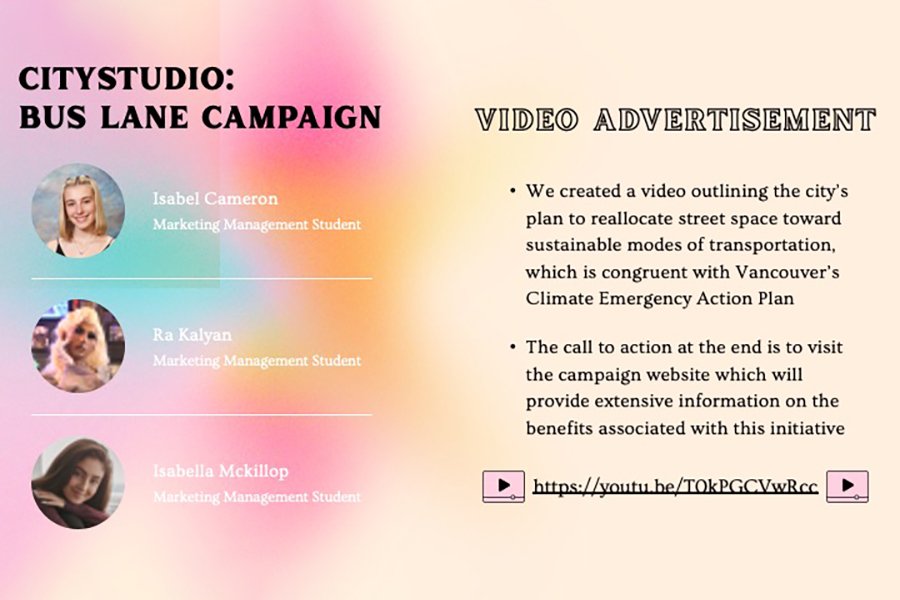 For our CityStudio project, we developed an integrated marketing communications strategy to promote the launch of new priority bus lanes in Vancouver, BC. This project aims to persuade residents of Metro Vancouver to be more open-minded about the reallocation of road space toward new priority bus lanes. Additionally, we want this campaign to pique the interest of those who may not be frequent transit users. To achieve that, we came up with a strategy to target the younger demographic of transit users ranging from 19 to 35 years old. The rationale behind selecting this demographic is that individuals in this age range are typically open-minded, environmentally conscious, and motivated to make changes in exchange for a better future. We included various forms of media including print, video, event sponsorship, accompanied by a social media campaign. The goal is to increase transit ridership by incentivizing current users to continue their patronage, as well as converting consumers of ride-sharing services to make the switch. Our campaign slogan is “I wish I took the bus.” We believe this slogan will be memorable as it will draw viewers in and get them to ask themselves why they should be taking the bus as opposed to other modes of transportation. Furthermore, humour was incorporated to communicate with our target audience in a positive way and keep things light-hearted. We believe that people using public transportation deserve a faster and more reliable transit system since they are making the conscious effort to reduce their carbon footprint.