It has been the CityStudio way for a decade to learn by doing, by following an idea, experimenting, and innovating. We believe that small projects can add up to big changes in our community, our city and in ourselves. We’ve learned that good projects are the result of good relationships and that working together is the only way forward.

The CityStudio Changemaker Contest was an invitation to past participants (students, faculty, City staff and colleagues alike), to discover what ripples in the water CityStudio had led to over the years and hear from the changemakers themselves what inspired actions and impact they had experienced.

When an experience prompts a change, or inspires one, there’s no telling what it will lead to. In sharing their stories, we want to honour the journey they’ve taken, the time we shared together, and we get to reconnect with relationships that left an impact in our team and programs. Read on the stories from our Contest Winners, as well as quotes from notable mentions from the CityStudio Changemaker Story Contest. 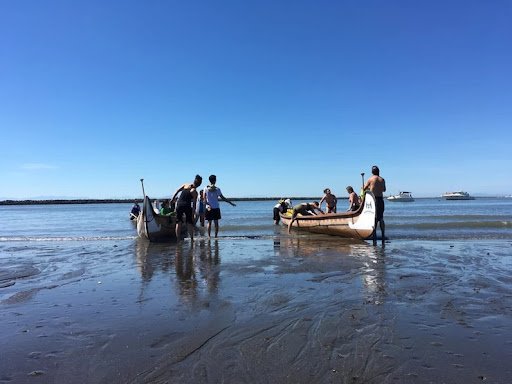 Story: My CityStudio journey has come full circle. I am a CityStudio alumna, and now I have the privilege of collaborating with CityStudio cohorts through my work at the City of Vancouver. After graduating with a Bachelor of Science in Biology, I realized that my passions exist at the intersection of science and engagement. I wanted to transform technical concepts about sustainability into action at the community level. The Master’s program in Education for Sustainability (through UBC, in partnership with CityStudio) helped me do this. Following the CityStudio model, we collaborated on projects that had real world outcomes. I worked with a team to create “rewilding kits”, which encouraged native species on private land. We sold the kits at the Park Board tree sale and were able to engage residents about biodiversity and ecosystem services. The kits sold out each of the three years they were available.

During the Masters program, led by Rob VanWynsberghe, Allison Earl and other instructors, we peeled back layers of Vancouver to learn about local sustainability challenges and opportunities. We became comfortable being uncomfortable by engaging in dialogue that disrupted our frames of reference and transformed our ways of thinking. We learned to trust the process, even if the process was messy. The program was place-based and experiential; we learned in canoes, in tree canopies, and on the seawall. Our projects involved place-making and had real world impacts on the city. As you create place, it shapes you too, and these real-world projects have helped form my path.

I connected with City of Vancouver staff during the program and I was so inspired by their work and their passion. These interactions informed my career goals, and I started to gear my experiences towards a career in policy or something similar. Before graduating, I was able to work as part of the City’s Sustainability Group on a temporary basis, and somehow six weeks has turned into four years. I am always incredibly excited to collaborate with CityStudio (and all of the wonderful students and professors), and have worked on projects that investigate equity metrics in climate plans, urban greening, and sea level rise. These collaborations always inspire me to think in different ways and seek out ways to improve equity and justice in my work. I strongly believe in creating spaces for youth to participate in civic processes; I have benefitted from the connections CityStudio has facilitated between local government and students, and I hope to create similar opportunities for youth.

While my CityStudio journey has come full circle, it is certainly not over. I am grateful for all of the connections I have made and lessons I have learned along the way, and I look forward to future collaborations with CityStudio! 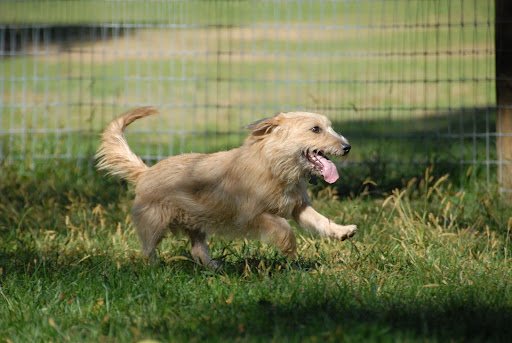 Story: In 2014 as a student at Langara College I was given the opportunity to tackle an area within Vancouver’s Greenest City Action Plan. Three professors and CityStudio worked together to motivate students to create real solutions to sustainability issues in our city. Three other students [Victoria Mykietyn, Madeleine Robichaud, Alan Stewart] and I decided to address waste in public spaces. How could we reduce the amount of litter in these spaces and prevent it from going into the landfill? We looked at audits done by the city about the components of waste from park garbage bins. We expected single use items to be the major contributor due to their size, and frequency of purchase. Though they were a component of what was commonly picked up, it was actually dog waste that was the largest contributor! Dog waste is organic and does not belong in the landfill. In an anaerobic environment, when it breaks down methane gas is produced. Methane is a much more potent greenhouse gas than carbon dioxide. So how could we keep this from making it into the garbage? Vancouver has an excellent tertiary wastewater treatment system and we thought why not treat dog waste just like we treat human waste. There are other places that do exactly this. We discovered that there was a small local company which specialized in picking up dog waste and ensuring that it was directed to these treatment facilities. The next question was how could we make it as simple as possible for people to stop putting their dog doodoo bags in the garbage? It would be unrealistic to ask people to take it home with them and flush it down the toilet. 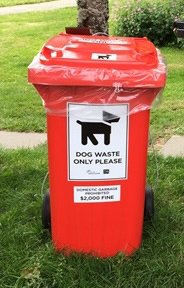 So, we designed a pilot project in which the city could place red garbage bins in public parks and this company could come and empty the bins on a contractual basis. We researched the parks most frequented by dog owners and suggested the top six parks in the city where this pilot project could be tested.

We presented to students, faculty, and city studio staff in a friendly competition to determine which groups would attend hubbub at city hall. We did not win, but we did make it as the third team selected to go to city hall. During HUBBUB, we were lucky to catch the attention of Deputy City Manager Sadhu Johnston and gave him the breakdown of our pilot project. He handed me his card, took one of our project proposals, and asked to set up a meeting with us. A few weeks later we were invited to present our project to Sadhu, the Department Heads from Parks, Sustainability, and Sanitation, along with several other members of city staff. We discussed our project with them, answered questions, and were exposed to how meetings with city officials transpire. And you know what? They chose to adopt it! Now eight years later, if you go to certain high traffic areas around our city those red bins are there, diverting dog waste away from our landfills. 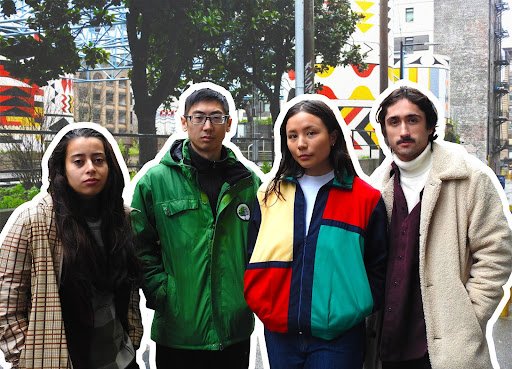 Story: [This story is about the Langara team from the Environmental Studies course: Carina Ramirez, Ming Wong, Samantha Huang, and Nicolas Munaretto, as told by Nicolas, in the Fall of 2021].

We came into this project with a conventional, individualistic approach to learning. Post-secondary school happens largely on your own: you choose your own courses, take your own exams, and spend hours on papers for only one person to see.

As individuals, we each came with unique perspectives and naively ambitious ideas about how to fix the world. Still, in a group setting, it’s easy to fall into the trap of filtering yourself for fear of being wrong. As such, the project’s direction seemed lost for most of the semester: it was difficult to find common ground where our ideas could merge.

What we learned, however, is that you can have a sense of agency without complete confidence in your ideas. We were fortunate to have mentorship that didn’t censor mistakes but encouraged them. We learned that you can still hold space for yourself in a group, and in a city, where making a ripple seems impossibly daunting. 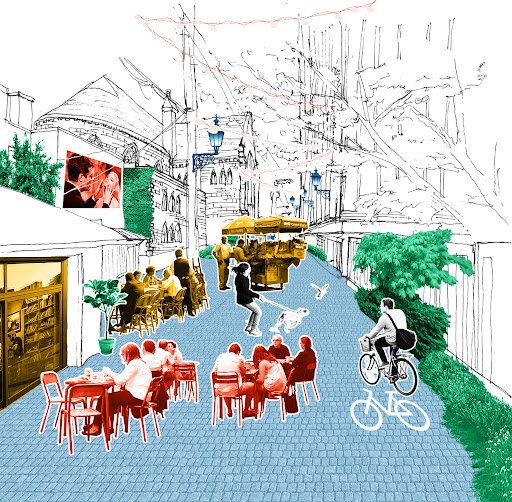 Allowing ourselves to simply dive into a process of open and inclusive dialogue without focusing on a major destination shaped our final product.

Realizing that this practice is central to creating momentum for both group and community work, we proposed The Laneway Menu as a framework for conversation. One that helps community members identify their priorities, as well as concrete steps to build a collective identity as active participants in what happens around them. We believed that this community-centred dialogue would create a sense of agency in the context of city dwelling and making.

In an individualistic world, the pressure to make a difference always feels like it should fall on your own shoulders, but we found relief in realizing that meaningful change doesn’t happen like that.

Consciously or not, that collective identity which we were trying to foster through The Laneway Menu was perhaps an accidental product of suspending the attitudes we arrived with to make space for something new.

“CityStudio makes it evident that innovation by collaboration and community engagement are crucial pillars of successful and meaningful work”
– Samer Rihani, Alumnus.

“I’ve been consistently impressed by the passion and creativity of students and faculty, as well as the thoughtful guidance of CityStudio’s project coordinators. I’ve learned to see the value in saying yes, testing new ideas. and trusting the process. Thank you CityStudio for all that you do!!
– Brad Badelt, City of Vancouver.

“Beyond projects, I met many interesting and inspiring people through CityStudio. I made friends with like-minded people in our community and got involved in other interesting projects that inspired me to be more creative. I wish every city had a CityStudio!“
– Alireza Mogharrab, Alumnus, Former employee.

What we learned in reading these stories is that CityStudio Vancouver has touched the lives of those far beyond Vancouver. We envision a Vancouver that is sustainable, equitable and joyful a place to live. With stories like these, our vision is being realized every day.