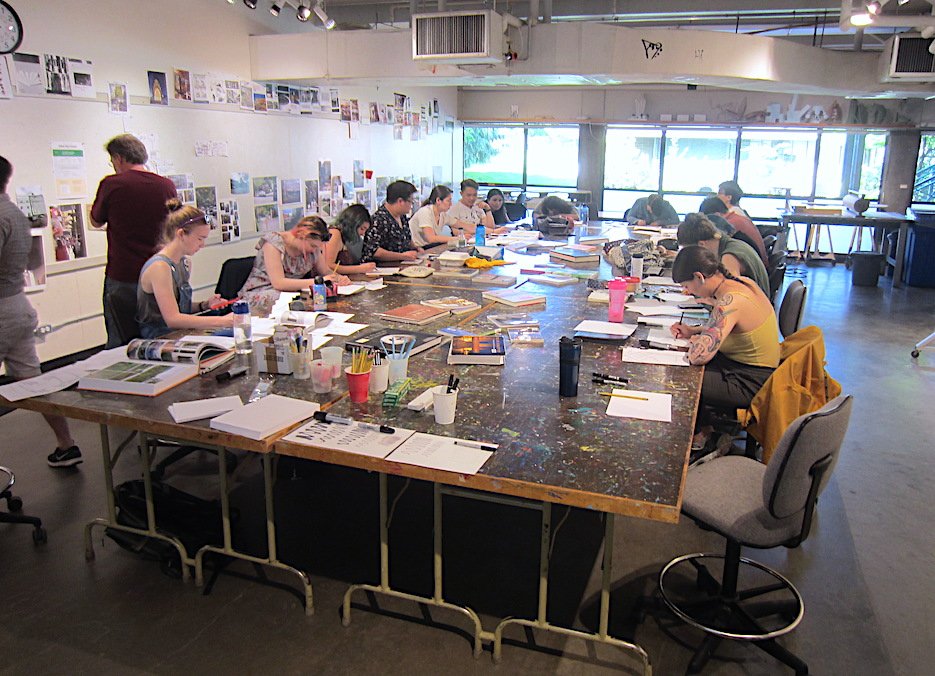 Partnering with CityStudio, the City of Vancouver and the Strathcona Business Improvement Association (BIA), the students used their research skills and creativity to collaboratively design physical interventions that would mitigate the Urban Heat Island Effect in the Downtown Eastside.

“Having CityStudio and Strathcona BIA as mentors made me feel inspired and empowered to make a difference in the community,” says student, Sandra Kim.

At the end of term, four student groups presented their design ideas to a panel of experts at the Strathcona Branch Library including:

From the four groups, a hybrid of two ideas were chosen by the panel to receive funding from the City’s Downtown Eastside Capital Grant and continue with the second phase of creating and testing a full-scale prototype.

What is the Urban Heat Island Effect?

This case study defines the urban heat island effect as a “phenomenon in which temperatures of urban areas are warmer than those in surrounding rural areas due to capture and release of solar energy into the built environment.”

Vancouver’s Downtown Eastside is an area with little vegetation or canopy cover and numerous impermeable, hard surfaces (ie. concrete, asphalt), making it a prime urban heat island. The impact of this effect on residents is significant, as many have little access to proper shade or cooling and find it nearly impossible to avoid the full force of summer.

Learning the needs of the area

To begin the term and the project, students participated in a walking tour of the area led by their instructor and the Strathcona BIA.

During this tour, students also scoped out potential sites in the Downtown Eastside where opportunities for interventions existed. In an area where the streets are often used like a living room, different considerations had to be made including security, safety, types of materials and existing vegetation. Flexible canopies, shade structures, social elements such as benches, and the use of misters were all explored as options.

As part of the research and design process, students also received vital knowledge and insights from neighbourhood stakeholders including staff at the Union Gospel Mission and a former guest of the service, as well as individuals at the Port Authority, a social planner at the City of Vancouver and City engineering assistant, Celia Winters.

“Having CityStudio and Strathcona BIA as mentors made me feel inspired and empowered to make a difference in the community,” shares student, Sandra Kim. “With them as partners, my group felt safe to explore creative paths with enthusiasm and passion. I noticed that the passion for building a better future was not just ours, but it was also coming from them, and it was clear that they were just as proud as us with the outcomes.” 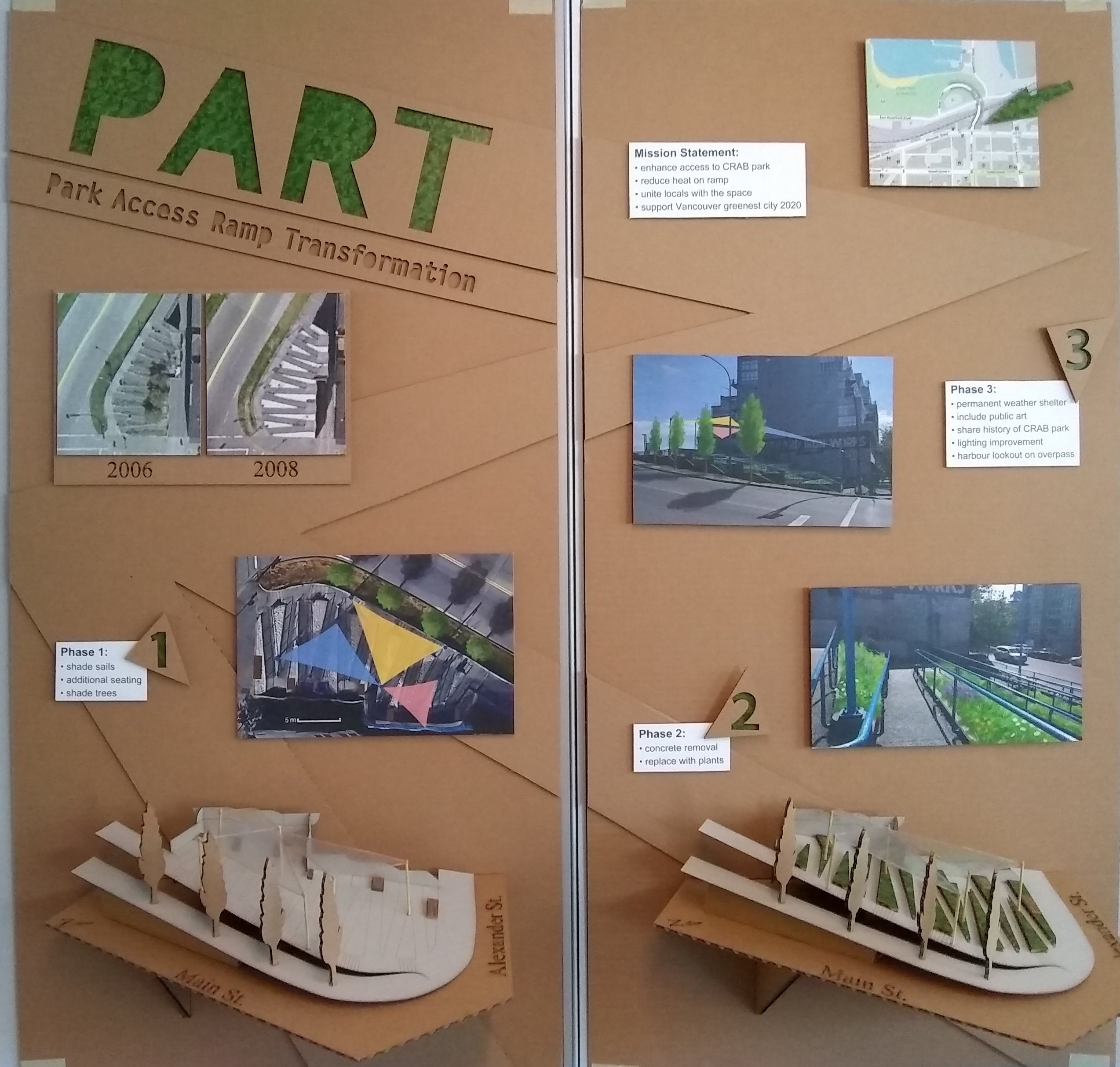 After several weeks preparation, the four student groups finalized their ideas and created miniature models to present to the panel of experts. All groups carefully considered the area’s residents and incorporated artistic elements which could be customized by residents to reflect community identity.

One group proposed the use of trees, benches and fabric canopies to create a cool social space near Crab Park, incorporating the existing accessibility ramp in the design. (right)

Another team designed a unique shade structure for Pigeon Park that would sit high enough in the trees so as to not take away from the existing totem pole, a cherished feature of the neighbourhood. This design also made use of the park’s current water source to irrigate surrounding plants and supply water for overhead misters. 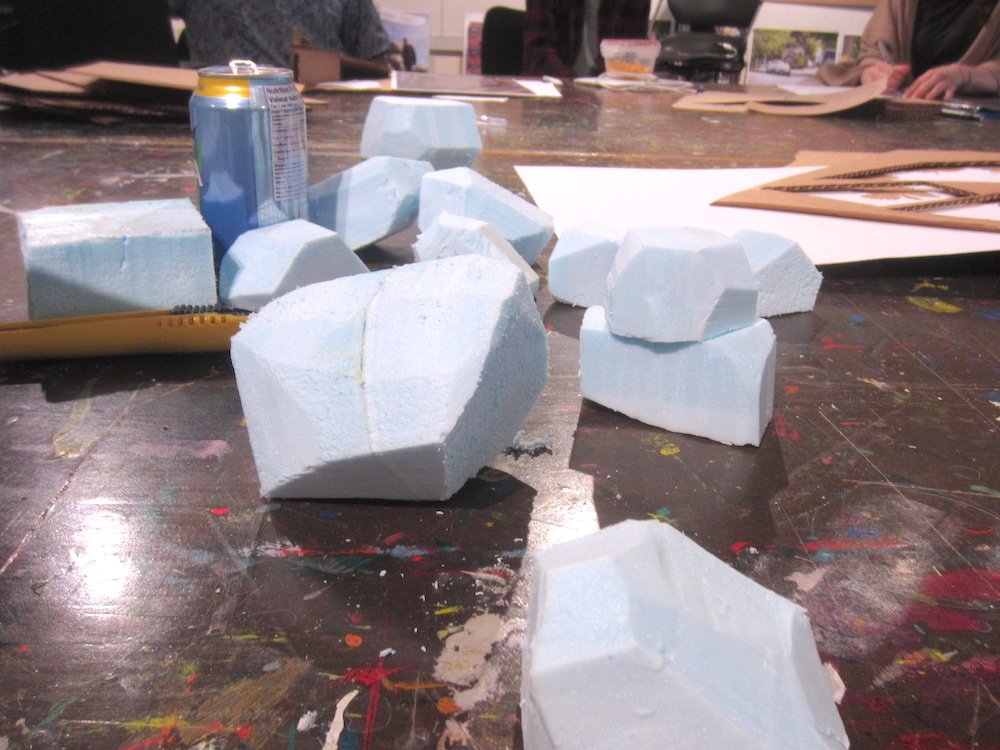 The third team proposed taking advantage of already shaded areas that lacked social infrastructure and installing large, uniquely-shaped concrete blocks to create seating. The blocks, made from a colourful, specially-pigmented recycled material, can be customized with texture and sandblasted text. They are also modular and can be repositioned (using machinery) to create a diversity of seating. (left)

The final group proposed the use of a specialized fabric material spanned between existing objects such as lamp posts, trees or buildings to provide relief from the sun. They also demonstrated the use of a large tent-like structure to provide a wider area of shade. (bottom right)

“[This was a] memorable experience filled with joy and growth, an experience that will continue inspiring me to change the world,” says Kim. 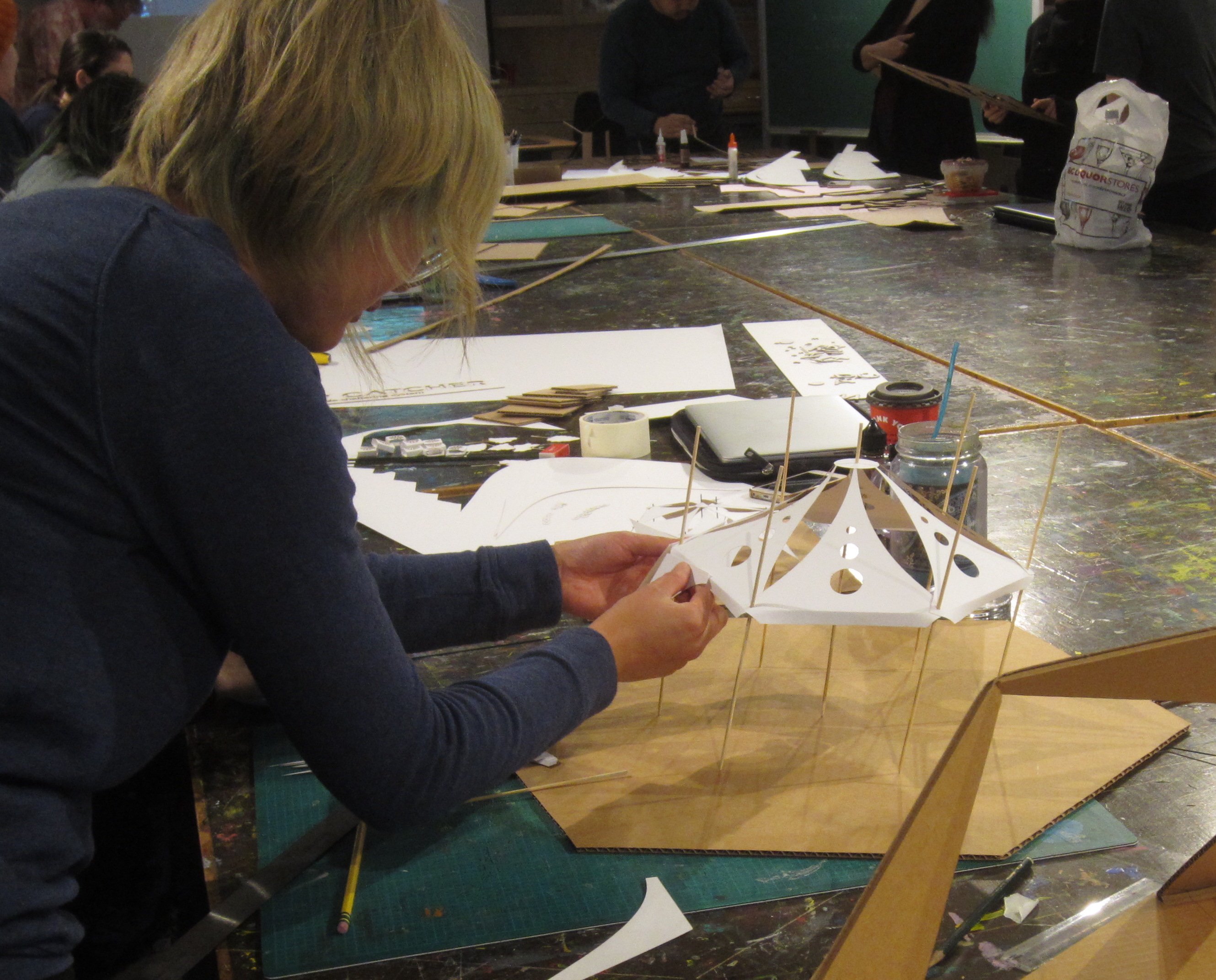 Ultimately, the panel decided to choose elements from two groups as the winning idea, both of which could be easily implemented and adapted for different spaces. The winning elements were the concrete blocks and the simple spanning of fabric between existing structures. These two components will be carried forward into the second phase of the project, led by Langara and the Strathcona BIA with the help of hired students.